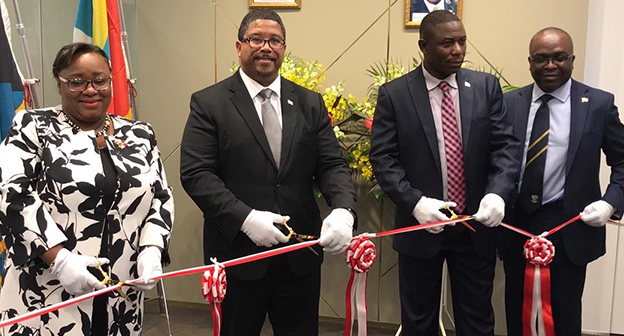 Deputy Prime Minister and Minister of Finance of The Bahamas, the Honourable Peter Turnquest has officially opened the Bahamas Maritime Authority’s (BMA) new office at Nishi-Shinbashi in the heart of Tokyo.  The office will provide direct service to the Japanese maritime market, the world’s second largest in terms of vessel tonnage.

Deputy Prime Minister Turnquest said: “I am proud to represent the Government and the people of The Bahamas at the opening of the Bahamas Maritime Authority’s Tokyo office.  Japan is a great maritime nation, and The Bahamas Ship Registry is one of the world’s top registries.  The Opening of our BMA Tokyo office represents an even closer commitment to serving our valued Japanese shipowner clients.  This will benefit the Japanese maritime community, and it will further the growth of The Bahamas Flag, which has been a consistent contributor to our economy.”

This important occasion was celebrated with the Bahamas delegation meeting with the Japanese Deputy Prime Minister, Tarō Asō and Japanese  Minister of Foreign Affairs Taro Kono, Japanese Minister of Transport, Land & Infrastructure (MLIT) Adachi Toshiyuki and the management of the Japanese Shipowners Association.  The BMA hosted an opening ceremony, which was attended by senior representatives from the Japanese maritime cluster, and where the President of Class NK Koichi Fujiwara took to the floor and said: “The BMA has continuously made sincere efforts to overcome safety and maritime challenges and it has been demonstrated in international conferences such as IMO meetings that The Bahamas has been a crucial partner with Japan.

Deputy Prime Minister Turnquest was joined by Minister of Transport and Local Government, Renward Wells, the Minister responsible for the BMA.  “The BMA serves its maritime clients comprehensively, rapidly and proactively.  Though we have been registering and administering Japanese-owned vessels for many years, I am confident that our permanent office presence in Tokyo will enable us to further enhance our support for Japanese maritime interests, and build on the BMA’s impressive record of success,” said Minister Wells.

Captain Dwain Hutchinson, Acting Managing Director and CEO at the BMA commented: “As the 2nd largest ship owning country of dead-weight tonnage (UNCTAD Maritime Review 2018)*, we recognise the strategic importance and integral role Japan plays in the global maritime sector.  This dedicated office will allow us to enhance our service delivery with exclusive BMA staff who will continue to be supported by our regional Classification Societies and Nautical Inspectors. We look forward to strengthening our relationship with the Japanese maritime cluster through our Tokyo office.”

The Bahamas remains a non-targeted flag from a port state perspective within the Asia Pacific (Tokyo MOU) and European (Paris MOU) regions, as well as a US Coast Guard QUALSHIP 21 flag state.  This positive performance coupled with The Bahamas being a most favoured nation in relation to ships trading to Chinese ports are beneficial for Japanese ship owners trading regionally and internationally.)

The growth of The Bahamas Registry under The Bahamas Maritime Authority has been a notable success story for The Bahamas.  The extension of The Bahamas’ maritime services directly into the vast Japanese market should underpin the Registry’s further growth.